Posted on October 9, 2011 by Jennifer Cavanagh

An edited version of this review has appeared on London24
A full century since it was first staged in Dublin Mixed Marriage, centred on a Protestant family in Belfast, resonates as clearly as any modern day socio-political drama. 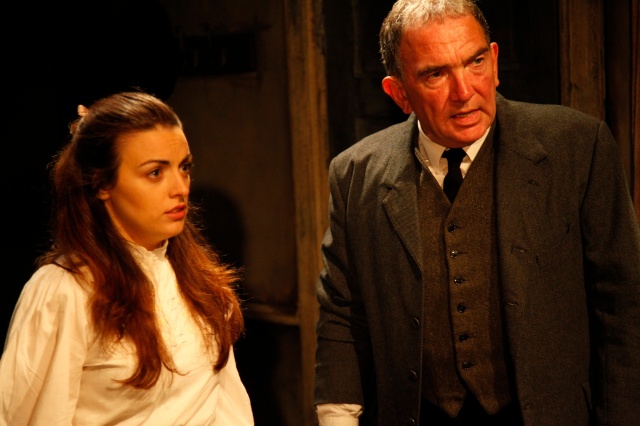 The script and Sam Yate’s production are emboldened by powerhouse performances from a superb ensemble cast of five. Respected Protestant John Rainey (Daragh O’Malley) is propelled by his son Hugh and Hugh’s Catholic friend Michael to the role of community spokesman.  Rainey unites striking sectarian workers only to find his own bigotry ignited when religious acceptance strikes closer to home.

Staging is simple – the tired interior of a working man’s home; a rustic table, a few chairs, an exterior door leading to a darkened misty street. As personal prejudices inflame sectarian violence outside and emotions rise the homely atmosphere turns claustrophobic.  The audience never sees beyond the door yet hear speeches delivered, temperatures rising and brutality reigning down.

Political idealists Hugh (Christopher Brandon) and Michael (Damien Hannaway) bring a youthful urgency and momentum to the cause of class unity over religious division.  Hannaway, in particular, brings such intensity to the stage that he is a virtual beacon of righteousness perfectly countering O’Malley’s obstinate Rainey.  The impatient unheeded nature of the youngest Rainey (Joel Ormsby) further heightens the edginess as he irritably stalks the small set.

O’Malley’s Rainey fills the set with a larger than life character infused with emotional immaturity. As peacemaker quelling the religious divide between striking workers Rainey is renewed and revitalised. His chest puffed with pride he finds a purpose which is all too soon threatened by the discovery that Hugh has taken up with Catholic Nora (Nora-Jane Noone).

Written in the advent of suffragettes Ervine weaves the influence of women as a secondary theme. Mrs Rainey (Fiona Victory) a humanitarian in housewife’s clothing tries to diffuse rising prejudices.  Her character progressing from stereotypically maternal – forcing tea down the throats of all that cross her threshold – to reveal a deeper compassion and understanding of society that extends beyond her household.  Victory is in fact present on stage throughout almost the entire production. Despite some heavy-handed clichés these roles demonstrate scope and struggles recognisable in the present day.

Nora’s role is limited despite its pivotal nature and an unfortunate lack of chemistry between the star-crossed lovebirds Noone creates a potent portrait of a young girl torn between religion, respectfulness and love. Noone has an extensive television and film portfolio yet in this her professional stage début she is assured and convincing.

Moving delicately from the specific to the general Mixed Marriage offers strong commentary on personal choice, self-thwarted ambitions, division of wealth, the role of religion and the power of bigotry in a thoughtfully nuanced and inarguably genuine tale.  A sledge hammer of a production that reverberates over time.