Posted on October 22, 2013 by Jennifer Cavanagh

An edited version of this review appeared in Apt613.ca
What’s in a name? Not much or so says Shakespeare but as murder is in its essence deadly this name sticks for the wrong reasons. Playwright David Foley weighed other monikers including the superior “If/Then” yet one thing we can say for his chosen designation is that it fairly screams “Christie-sque Thriller” and that is exactly what the evening delivers

Set in the luxury apartment of a Manhattan socialite of “a certain age” Camille (Kim Strauss) this three-hander gets straight to business with Camille attempting to divest herself of one-night stand waiter Billy (Connor Marghetis) who, in turn, most ungallantly rejects this post-romp dismissal. Attempted offers of “cab-fare” escalate to sex tape blackmail and the summoning of security guard Ted (Tim Finnigan). Revealing himself as an accomplished hustler Billy soon has both Camille and Tim disarmed with a scenario shift from opportunistic burglary to pre-mediated shakedown. From this point hairpin twists come fast and furiously throughout the 2 Acts with murders, both real and imagined, moving the action along in thoroughly entertaining order through to the final curtain. 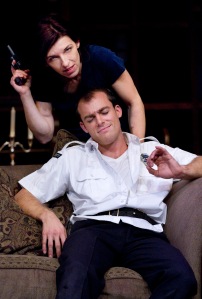 In the interest of full disclosure thrillers are not my predilection so the competence and enthusiasm the cast brought to the stage was a gratifying element of the evening. Marghetis is a charming and scheming interloper though a dollop of pure menace could only enhance his part. Finnigan though capable at times struggles to characterise the full weighed of down-trodden desperation in the role of the indebted gambler security guard. Kim Strauss however is a stand-out as Camille embodying the quintessentially clever, slightly-jaded, socialite with energy, insights and timing as sharp as any hustlers.

It was with trepidation transformed to admiration that we watched Strauss, without training or experience, take to the stage commanding the room with a highly believable personification of a rather multi-faceted Camille. From the very outset while attempting to shift her unwanted Lothario Strauss moved seamlessly from charmingly indulgent to confidently direct telling Billy to “suck it up and move on”. On stage almost throughout and with the lion’s share of dialogue Strauss assuredly kept pace, drama and our avid attention.

The trio’s witty delivery and obvious synergies alongside Foley’s psychological contortions elevate the evening above whodunit plotlines to a fully-formed production that’s a pleasure to watch through to the clever if/then ending.

This entry was posted in Uncategorized. Bookmark the permalink.