Posted on October 28, 2011 by Jennifer Cavanagh 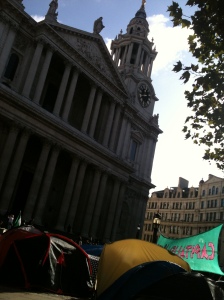 St Paul’s remains occupied and the protest  is a moving, peaceful affair. Surprisingly small the tents are clustered to one side of the Cathedral leaving the entrances and steps fully accessible. 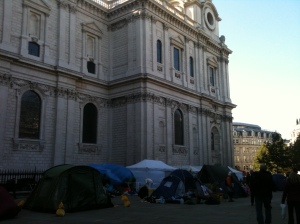 Having worked for years in the shadow of St Paul’s I can confirm the camp causes no inconvenience to businesses nor limits accessibility of workers and tourists to the area.  I’ve seen more obstruction caused by local offices workers having lunch on the steps; afternoon sun-trap that they are. The only inaccessible area is in fact Paternostre Square closed by owners Mitsibushi Estate co.  Clearly businesses within the square: Corney&Barrow, The Paternostre Chophouse etc must be struggling but they need to talk to the landlord regarding sealed off access rather than blame the protest.

Tonight, as the Cathedral prepares to take legal action to oust the protesters, the Rev. Giles Fraser resigned his post as Canon Chancellor. I have nothing but respect for Fraser and his commitment to his beliefs and faith.  Ten days ago he instinctively demonstrated leadership and compassion by inviting protesters to stay so long as they remained peaceful.

Having first visited St Paul’s two days before the Cathedral closed for preposterous health and safety reasons I can only imagine Fraser’s frustrations with his chosen organisation.  The situation at St Paul’s was far from a clear and present danger. The small encampment is well removed from access points, it has a pop-up library, a white-board listing the day’s events, and around the camp serious groups huddle together in intense discussions. Hardly the blitz. 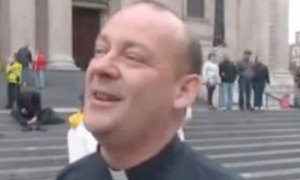 The Cathedral’s overreaction and now pending legal action is simply another nail in the coffin for organised religion while Fraser demonstrates perhaps the only viable option for believers – follow your conscience.  Shame on the Cathedral for not seizing an obvious opportunity to cast itself in a new light as an all-embracing authority willing to back the populace. I certainly found it touching to see protest taking place in the shadow of this iconic building. After Fraser’s initial welcoming statement I felt renewed respect for the history and present incarnation of this place. Without getting in to the thorny “What would Jesus do?” debate it certainly seems clear that concerns about tourist revenue, health & safety and litigation wouldn’t be top of the list. 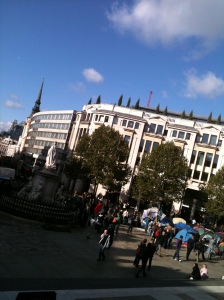 View from steps of St Paul's

The ground-breaking exposé that most protesters go home at night also hit this week. Given that this is purportedly the 99% should I be shocked to find they have jobs, families and other responsibilities?  That they are taking time from full lives to show their protest? The protesters that I spoke with were employed, some working via wi-fi while others juggled diaries to put in an appearance. Certain tents are occupied by hard-core protesters that stay nightly while others offer accommodation for a rotating populace. The camp runs a check-in process and are able to provide details of nightly occupancy.

Finally to say that the protesters don’t know what they want belies the truth.  The consistent answer given to the question “what do you want” was a return to the regulations that provided economic stability for 50years until they were slowly removed in the 1980’s. This was the proposed “solution” to how to separate government from corporate pressure. 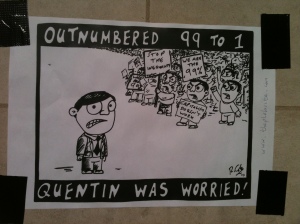 This protest, unlike say the riots, is conducted peacefully not by a marginalised group but by employed contributing members of society demonstrating genuine outrage over financial inequities and sincere concern over growing economic instability.  It doesn’t feel like a protest down there in the shadow of St Paul’s, it feels like a movement.

Update 2 Nov 2011:  A further resignation came from the Cathedral’s Dean Rev Graeme Knowles while the Archbishop of Canterbury acknowledged the Cathedrals’ faux-pas in closing and backed the protesters’ position.  As a result the City of London withdrew plans to issue an eviction notice.