Posted on September 3, 2011 by Jennifer Cavanagh

An edited version of this review has appeared on MyVillage.com 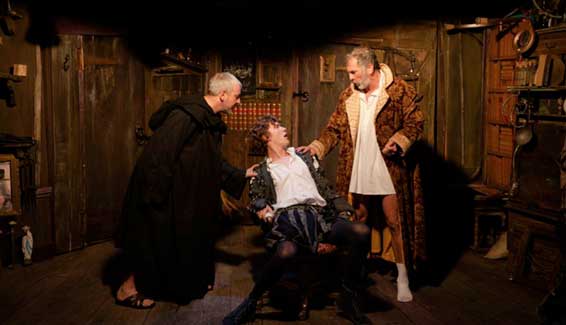 David Davalos’ Wittenberg centres around whether “to believe or not to believe” with undecided scholar Prince Hamlet in the crossfire of wits as Theology lecturer Martin Luther and Philosopher Dr Faustus go head to head arguing the case of religion against humanism.  The tug of war between colleagues on matters of faith versus philosophy is earnest and entertaining –Sean Campion’s Faustus declaring the Bible a source of answers for Theologian and questions for Philosophers.  The pub-crooning Faustus – twice a week at the Bunghole – mixes philosophy, medicine and women in his bon-vivant approach to life taking evident pleasure in the needling of the intensely devout and dour Luther (Andrew Frame).

Davalos’ play sees Hamlet’s mental house thrown in to disarray not by scheming relatives but by an inability to reconcile Corpenicus’ theory of the sun at the centre of the solar system against religious teachings.  The tattered tennis playing undergrad (Edward Franklin) is unable to square hierarchical faith against scientific proof yet it is Luther’s own doubts about Rome that are at the true heart of the production.

Rome grows wealthy through the sale of forgiveness leaving Luther struggling with his beliefs and loyalty to the papacy.  Staunch faith and argumentative intellect are crippled by the self -serving financial objectives of the Vatican opposition to which is sacrilege.  These weaknesses are seized upon by the mocking Faustus who accuses Luther of “abandoning the patient for the cancer” it is game on between the two worthy opponents.  The debate between Faustus and Luther is bawdy, inflammatory, the perfect storm of animosity and grudging respect as the actors deliver fiesty performances.  The production comes into its own during these sequence as Frame & Campion ignite a drolly feverish battle of wills and wit. Humours needling and hot tempers flare

The play, peppered with so many literary references, verges on coy yet Christopher Haydon stages a spirited UK premier that is never bogged down by its own cleverness. This Gate production is a thinking man’s affair wrapped in a cloak of humour.Come for lascivious pub crooning, lap up the “brau” fuelled debates and prepare for the cold wind wrought by the choices of men.

1 Response to Wittenberg @ The Gate Theatre – 4*