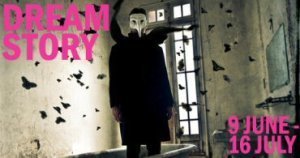 An edited version of this review appeared in MyVillage.com…
Director Anna Ledwich brings Arthur Schnitzler’s 1926 novella, made famous by the movie “Eyes Wide Shut”, to the Gate Theatre this month.

Under her direction Schnitzler’s tale of jealousy and hidden desires transports the audience from the sharing of dreams to the ever-increasing shadowy darkness of the human heart.  What opens with a drunken post-party covetous discussion between man and wife descends rapidly to exposed indiscretions and the active pursuit of secret longings before returning to the memory of a fast-fading dream.

Luke Neal and Leah Muller are adroitly cast as husband and wife in this adaptation. The physical contrast marries well to the imbalance within Fridolin and Albertine’s relationship the former’s persona as upstanding citizen soon transformed to seedy sexual predator. 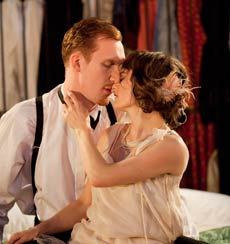 The stage is dominated by a bed which slides to create different rooms and spaces. Most effective is a powerful lift sequence descending in parallel with Fridolin’s moral compass. The decadence of wealthy Vienna in the 20’s is admirably portrayed via costume and the contrast with the poorer classes. 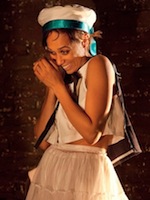 The cast are truly masterful and it is a play worth seeing for the performances alone. Neal is convincingly duplicitous and cruel while Muller is outstanding in her transformation from wife to wicked costume merchant. Rebecca Scroggs, in multiple supporting roles, is particularly arresting as the dejectedly spurned lover injecting a rather surprising bit of humour.  Jon Foster in smaller roles equally brings presence to the characters he embodies.

The challenge of portraying dreams however requires the audience to delineate between reality and fantasy and it’s ultimately wearing in this protracted production. A complex portrait of yearning and madness – to be fair – that resides within an overly long and hazy chronology. In the end, no one’s dreams, real or staged, are ever quite as interesting to anyone else.